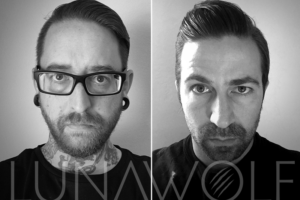 What happens when a rock guitarist with an obsession for the 80′ teams up with a former world traveled punk drummer turned producer/DJ? Lunawolf! It all started when guitarist Chan Schulman (Harper & The Moths) found himself in front of a Microkorg keyboard, not being a keyboard player, he was instantly lost in a world of tones and knobs. A few hours later, he had a key and vocal version of the song “Invisible”. Not knowing what t do with the song, he sent it to DJ friend, Jim Wilcox (Authority Zero) who built Chan’s two tracks up into a slamming production. The vocal and main keys you hear in the song on their debut EP are the vary tracks Chan recorded in his bedroom. The two quickly decided to ditch the Microkorg for some more serious sounding synths and continued working with each other all while hundreds of miles apart; Chan in Arizona and Jim in Colorado operating in separate studios collaborating via phone and email. What you hear on their record is a result of over a year’s worth of work which ultimately became a poetic and melodic diary of dark and beautiful thoughts as two people traveled through the hardships of life.